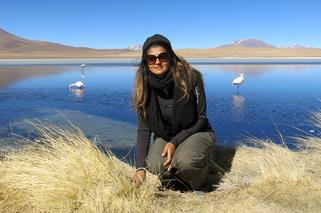 Zoya is interested in marine ecology, particularly in elasmobranchs, coral reef ecosystems, and efforts to conserve them. Her past experiences involve working as an education officer with Andaman Nicobar Environment Team, India, where she developed and coordinated marine related education programs targeting higher education programs and local communities. Simultaneously, she researched the terrestrial behaviour of sea kraits, and was part of a project studying reef resilience in the Andaman Islands, India. For the past year, she has been assessing the conservation status of elasmobranchs in the Andamans and Nicobar Islands supported by the Rufford Foundation and Conservation Leadership Programme.

Dipani is a freelance ecologist based in Ahmedabad, India who has spent the last 15 years involved in marine research studying aquatic systems, marine mammals, and elasmobranchs. Her PhD study through James Cook University, Townsville, Australia investigated the population size and threats to Irrawaddy dolphins in Chilika Lagoon in eastern India. She is currently still affiliated to James Cook University as an Adjunct Research Fellow and is also a member of the IUCN Cetacean Specialist Group. Her research focuses on animal behaviour, habitat ecology, and socio-ecological systems. She works with and advises students and ‘in-between’ researchers who are interested in ecology and conservation and wish to explore options before moving on to a PhD. Since 2014, she has led and supervised projects on sharks and rays in Gujarat, Maharashtra, and Andaman and Nicobar Islands to understand shark fisheries and the role of stakeholders in shark conservation.

Fahira has always been fascinated by the sea. With a Bachelor Degree in Biology, this interest has now pushed her to pursue a Master’s degree in Marine Biology at the Hormozgan University in Iran. She is very concerned about the status of elasmobranchs (sharks and rays) around Qeshm Island and in the north of the Hormuz strait due to pressures from both artisanal and industrial fishing. Her study aims to gain a better understanding of the species of sharks and rays that occur in these waters and the impact of fisheries on stocks. To ensure her data can be used to inform policy and management, she is working closely with local government institutions, particularly the Qeshm Department of Environment of Qeshm Free Area Organization with support from Dr. Sharif Ranjbar and the Global Environment Facility Small Grants Programme.

THE TEAM - PAST AND PRESENT​​

Rima is a marine scientist with over two decades of experience in fisheries, threatened species research, and conservation focused projects around the world. Having lived by the sea her whole life, she has always been fascinated with nature and the environment and wanted to study and protect animals even as a child. She has spent over 18 years developing and working on a variety of conservation initiatives and has experience as a field research scientist, director for non-profit organisations, and government official. Rima has travelled extensively to over 80 countries and assisted in research on sharks, rays, dolphins, turtles, coral reefs, and seagrass beds in places like the Bahamas, South Africa, US, Australia, Kuwait, Qatar, Iran, India, Senegal, and the UAE.

Rima has a B.A. in Political Science, Masters of Applied Sciences in Natural Resource Management, PhD in Environmental Science and Ecology and several other graduate degrees including Public Relations and Education. She has authored/co-authored over 70 scientific, technical, and popular publications, lectured at schools and universities, and appeared in radio and television productions. Her work on sharks and rays has been featured in various local and international media outlets including National Geographic, BBC, Scientific American, Hakai Magazine, Gulf News, The National, and the Khaleej Times. She has published a book on marine ecosystems in the UAE, an identification guide for sharks in the Arabian Seas Region, an IUCN report on the conservation status of sharks, rays, and chimaeras in the Arabian Sea and adjacent waters, an identification guide to wedgefishes and giant guitarfishes, and a series on the identification of Convention on the International Trade in Endangered Species of Flora and Fauna (CITES) listed shark and ray species. After serving as the Regional Co-Chair (Indian Ocean) of the IUCN SSC Shark Specialist Group from 2017 to 2020, she was appointed as the Chair for the 2021–2025 quadrennium. She is also a member of the IUCN Marine Conservation Committee, sits on the Advisory Committee for the Convention on Migratory Species (CMS) Sharks MoU as a representative of the Asia region, and was appointed as the Scientific Councilor for Fish for CMS in 2020. She has received various grants and awards in support and recognition of her work on sharks and rays in the UAE and broader northwestern Indian Ocean. In 2019, she was awarded a Pew Fellowship in Marine Conservation to investigate wedgefishes and giant guitarfishes in Sri Lanka, India, Senegal, and Mauritania.

Her PhD research on shark populations along the UAE coast of the Arabian Gulf was the first long-term research project to be completed on elasmobranchs in the northwest Indian Ocean. She interviewed fishermen across the country and examined the artisanal fishery in the UAE describing species composition, population abundance, and distribution; studied the feeding ecology of two commercially important species; and characterised the international trade in shark products from the UAE. She is currently collaborating with scientists from around the world on various projects related to marine species and is coordinating a project investigating bycatch in industrial fisheries across seven countries in West Africa. Her long-term goal is to develop projects that will allow her to gather scientific data on wildlife and ecosystems and can influence decision makers to implement meaningful measures for the protection and conservation of the marine environment. She is particularly interested in issues of human-wildlife conflict such as fisheries, bycatch, and threatened species conservation as well as socio-economic aspects of the trade in marine products. Her goal with the Elasmo Project is to have it play a key role in helping document and understand the diversity of sharks and rays in data-poor areas around the world. This is particularly important because of the many conservation challenges in the region combined with opportunities to collect new data, involve and build the capacity of local communities, as well as inform and influence policy. 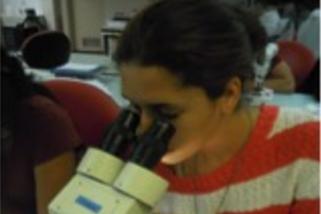 Lucia is an enthusiastic marine scientist that has always been fascinated with the sea. She has a Bachelor's in Oceanography and a Masters in Marine Biodiversity and Conservation. Her  aim is to combine her oceanographic knowledge with marine biology in order to enhance her understanding of species habitats and interactions. This knowledge will be crucial for effective protection, conservation, recovery, and awareness of the marine ecosystems and species inhabiting them. Since she started her academic studies, she has had the opportunity to work on various project around the world through various universities and research stations including UNIVALI (Santa Catarina, Brazil), University of the Algarve (Faro, Portugal), University of Gent (Gent, Belgium) and University of Paris - Pierre et Marie Curie (Including Marine Stations of Villefranche sur mer, Roscoff and Banyulls sur mer). Her work has focused on oceanography, molecular and cell biology, biodiversity monitoring, the ecology and behaviour of marine mammals, the creation of Marine Protected Areas and the conservation and restoration of marine resources. Lucia has just launched the Angola Elasmo Project investigating elasmobranch fisheries in Angola, a country where very limited research has been undertaken on these species. 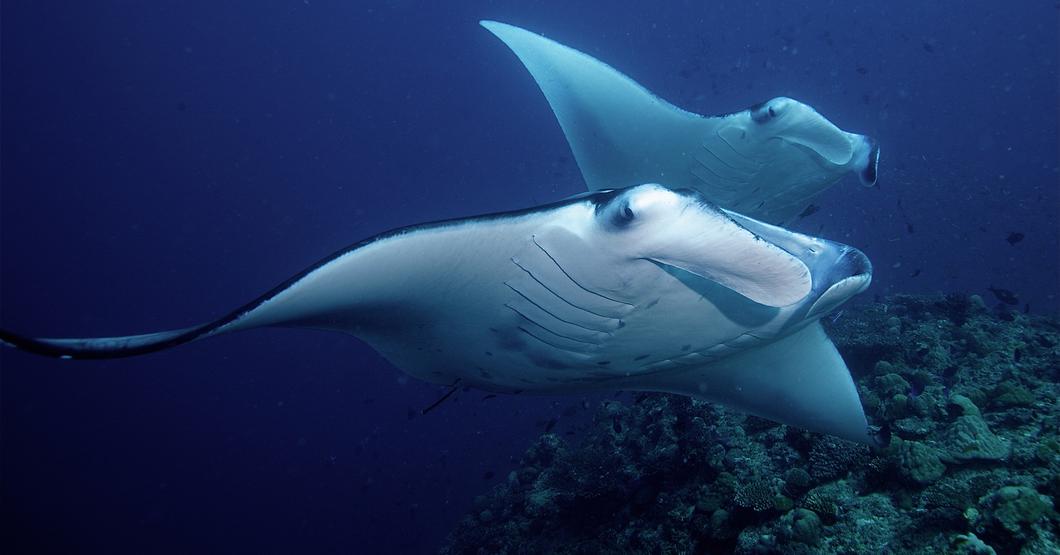 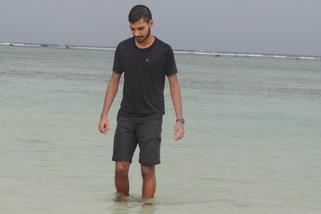 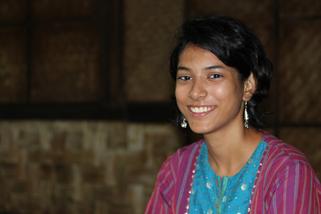 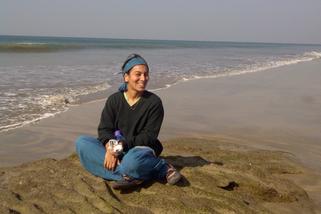 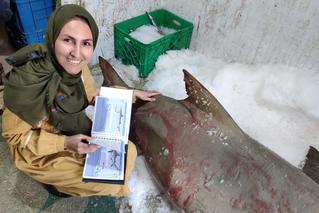 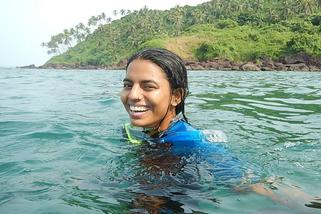 Evan has been fascinated by marine life since a very young age. Coming from a country that hosts one of the top three shark and ray fisheries in the world, his aim is to use research as a tool to provide awareness of the current plight of these ecologically crucial animals. He began working on elasmobranchs during his undergraduate studies, when he volunteered on a project funded by the Save Our Seas Foundation which focused on monitoring elasmobranch fisheries along the west coast of India. His newly found passion towards elasmobranch conservation influenced him to pursue a Marine Biology postgraduate course with Pondicherry University based on the Andaman Islands. Since then, he has volunteered on multiple projects aimed towards gathering information to support conservation initiatives for sharks, rays, and cetaceans. He is currently working on an independent project that will shine light on crucial stages in the life history of Critically Endangered giant guitarfishes (Glaucostegus spp.) in the Andaman Islands.

The oceans and its creatures always stirred a sense of curiosity and wonder in Alissa. But when she first began working on elasmobranchs, she knew it was the beginning of her journey with these beautiful marine beings! During and after her masters, under the guidance of Dr. Dipani Sutaria and Dr. Rima Jabado, she gathered baseline data on sharks that were landed across the north western coast of India – Gujarat which contributed to a larger project funded by the Save our Seas Foundation. She then worked with Dakshin Foundation and shifted her focus from the west to the east coast (State of Odisha) of India. Here she attempted to document the trends of elasmobranch fisheries with respect to crafts and gear, demand, and catch over the last 40 years. She is working on a proposal to understand intersexuality in sharks and why such individuals occur. In the meantime, she is also collecting data on wedgefishes and giant guitarfishes across Gujarat, Maharashtra and Odisha through interviews with fishers and landing site surveys as part of the Pew Fellowship in Marine Conservation awarded to Dr. Rima Jabado.